Well, it’s been quite awhile since I have updated this blog.  Life has been very busy of late.  Time for an update on BlowPro and the BlowPro apps for iOS and Android!

As a small 2-person company, I have to split my time between BlowPro and the other aspects of life such as my main employment.  Work has been very busy over the past year and I have found it very difficult to, in particular, complete the final 10 percent or so of work that has to be done to bring the BlowPro Android app to “Version 1.0” level where it is suitable for public release.

For what it’s worth, I also had to step away from my participation in the RMM2 pipe band for the busy summer season.  Life was just too busy.

My intent, over the next couple of months, is to finally complete that 10 percent of work and get the Android app “out the door”.  The remaining work concerns clean-up of the user interface and more testing to ensure that the function set of the app is complete and comparable to the full functionality of the iOS BlowPro app.

The iOS app has been stable, and I have had only a couple of general inquiries on usage of the app over the past few months.  This is encouraging as the app is meeting users’ needs, and (importantly) the Blowpro hardware platform is stable and users have reported zero “bugs”.

We have started a second production run of 50 BlowPro units, as stock is getting low at Tartantown.  As the hardware platform is stable, I anticipate no hardware changes for the device at this time.

The Android app, of course, will function “out of the box” with an existing BlowPro device, so as a user you will have a choice to use either app with your device.

So apologies to our site visitors for the delay between posts, and as I have completed a couple of big projects in my main line of work, you can expect more frequent updates leading up to the release of the BlowPro Android app, and the completion of production run number 2.

The BlowPro Android app is nearing completion, and will be entering a beta test period in the next few weeks.

Current work is focused on putting the finishing touches on the app’s user interface and adding final-stage functionality such as that related to storing and reviewing a piping session.

Look for the Android app to be available this coming September.

Here are a couple of screenshots of the app “under development” in “Android Studio” yesterday:

If you are interested in seeing the BlowPro iOS app in action, please watch our brand new demo video on YouTube.  See https://www.youtube.com/watch?v=YvMV1HCuLHY:

The video gives you a 5-minute run-through of the use of the app and some of the features it provides.  Kevin’s your host, and although the video is not “Hollywood” quality, it is good enough to show off the app and what it can do.

In production are two additional videos which show the BlowPro (and app) in actual use.  Alastair Lee of the SFU Pipe Band works with Kevin to illustrate how the device works.

The BlowPro Android app is under development, and is shaping up fairly well.  There are no graphics yet, but the app scans for and finds a BlowPro hardware device, connects to it, and is able to read bag pressure and temperature data and send commands to the hardware device.

Much work remains to be done, but the app is on track for a September, 2018 release.  It will be free, of course, and available via Android’s popular app distribution sites.

For the curious, here are a few screenshots from yesterday.  Note: the app is still “alpha” quality and the screens will be cleaned up prior to app release.

News in from our distributors, Terry and Alastair Lee of Tartantown.  BlowPro sales have reached many locations around the world.  In no particular order:

User support is very important to us.  We’ve had two inquiries so far.  The questions and answers will be added to the BlowPro FAQ.  In summary:

That’s it for this update!

BlowPro has been recognized as an innovative new product on the popular piping/drumming/band site, pipesdrums.com!

We thank the staff at pipes|drums for taking the time to look at our new device.

Check out the article here.

After over one year in development and four months of beta testing, BlowPro 1.0 has been released to production.  The initial production run will be 100 units.  All units will be assembled and tested in Burnaby, British Columbia.

The units will be available for sale on March 31, 2018.  See Purchase/Where to Buy for information on where you will be able to buy your BlowPro unit. 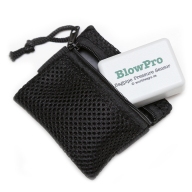 Welcome to BlowPro Central, the site for documentation, support and other information in relation to your BlowPro device!

The BlowPro is a new device for serious pipers that assists them in development of their blowing, an advanced piping skill.

The device goes into the user’s pipe bag and reports bag pressure and temperature to the user in real time via a smartphone app.

The BlowPro device will be available for purchase on March 31, 2018.

General inquiries may be sent to info@worldways.ca, while support issues may be submitted to support@worldways.ca if the issue cannot be resolved on this site.